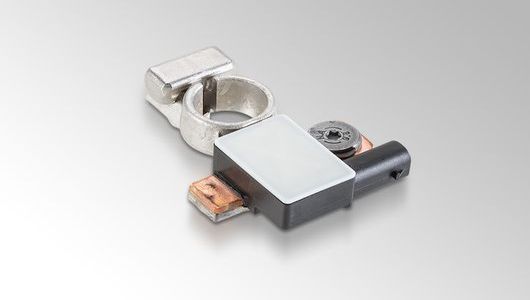 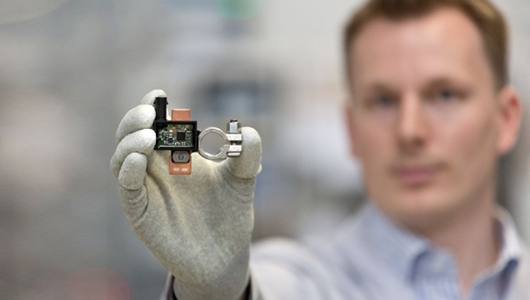 The IBS generation II is attached directly to the negative terminal of the battery via the pole terminal. In addition to the terminal, the mechanical portion of the battery sensor consists of shunt and ground bolt components. The shunt is attached to the vehicle’s load path and is used as a measuring resistor to measure the current indirectly. The existing ground cable can be comfortably fixed to the grounding bolt with a cable lug.

The electronics are located in a molded casing with a plug connector, functioning as the interface to the energy management system. The communication interface to the higher-level control unit is the LIN protocol. The supply voltage, used simultaneously as the reference voltage for voltage measurement, is provided by the connection to the positive pole of the battery.

This sensor can now also monitor more powerful batteries. Thanks to the higher nominal capacity that can be set, this battery sensor can also be used to monitor several batteries connected in series. Instead of 250 ampere hours they can be configured for up to 500 ampere hours (Ah). This is particularly important in view of the growing energy requirements of motorhomes and caravans. These new IBS generation II units are also particularly robust and can reliably detect short-term, high current consumption – for example when bow thrusters are used.

The intelligent battery sensor (IBS) , generation II, informs you about the current energy balance, allowing you to plan your energy supply.

The IBS generation II also comes with the tried-and-tested CI bus interface, which is increasingly becoming a standard in the caravaning and motorhome industry. This communications interface can be used, for example, to convey the battery’s charge status to the charging system, which switches on automatically if necessary.

Experience individuality in its most beautiful form with HELLA Shapeline.

Maximum flexibility for a wide range of applications with our new Bi-LED headlamps of the HELLA 90 mm module series.