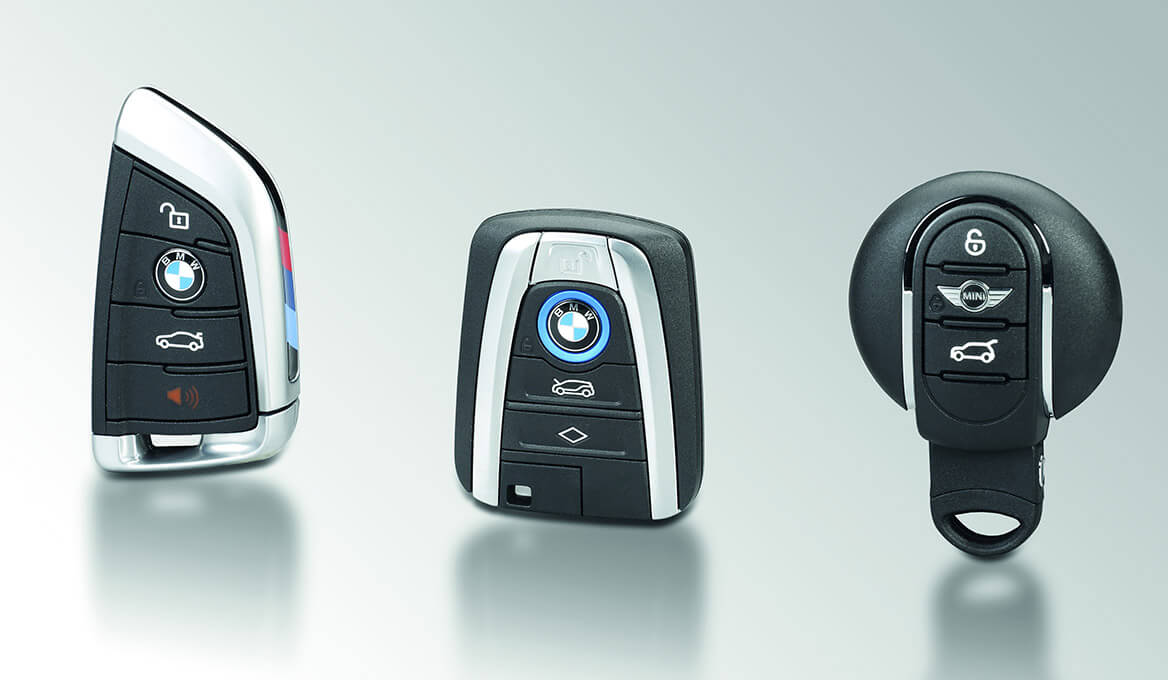 What a relief it was in the 1970s when you were able to change the TV channel on your TV set fairly reliably and without significant interference for the first time using an infrared remote control . Finally, you no longer needed to get up. “Zapping” was invented. Couldn't this technology also be used for opening and closing locks on vehicle doors without contact? More and more drivers at that time were getting annoyed about broken car keys, scratched door handle recesses and frozen door locks. Furthermore, different keys were usually required to open the door lock, the tailgate lock, the ignition/starter lock, the fuel filler cap and the glove compartment. Combination keys were only introduced over time.

IR key: Open the door with a "click-clack”

At the end of the 1980s, the first vehicle keys with infrared (IR) remote control came onto the market for series-produced luxury cars. This meant that the central locking system, which was introduced step by step at the time, could also be operated without contact. However, a classic key, which was usually unfolded, was also part of the "drive authorization unit", because the IR key’s battery usually didn’t last very long. In addition, it had to be possible to start the car using the "ignition lock", so nothing changed for the time being. Sometimes there were IR variant exceptions, which required a functioning transmitter battery for the start authorization. But it was so cool to show the "remote control" off to your friends: as if by magic, the car’s door locks opened with a "click-clack".

In the early nineties, the first remote keys replaced the less reliable infrared technology. They also possessed a key bit, i.e. a classic (folding) key. Later, the first remote keys without key bits and with an electronic ignition lock came onto the market. They were inserted into a corresponding holder rather than a classic ignition lock. To start, you simply pushed the "key” in.

Remote keys are still common technology today and their range of functions has been continuously developed. Using a frequency of 433 or 434 MHz (Europe), they send an encrypted signal to the comfort control unit, which controls the vehicle doors, for example. After pressing the corresponding button on the key, the door locks open or close via an electric actuator. In addition, the immobilizer, which has been mandatory for all newly registered vehicles since 1998, is deactivated using a transponder in the key and individual coding when starting the engine. The engine can be started using the ignition lock.

The good old car key is out of date. It has long since been replaced by modern remote keys. Photograph: Georg Blenk, Krafthand Medien

Smart car keys are more than just a door opener

Modern remote key systems can do more than just open or close vehicle doors or sliding doors, the tailgate and the fuel filler cap. For example, the rearview mirrors automatically fold out when the vehicle is opened, lighting elements are activated to increase safety, and the immobilizer and alarm system are deactivated. In addition, all windows close when the vehicle is locked or open when the vehicle is unlocked, if desired. Acoustic and optical signals are also helpful when opening the car, especially if you are looking for your car in a car park. The range of modern remote keys is about one hundred meters. A mechanical flip key is integrated into the key. This allows the driver's door to be opened manually and the engine to be started via the ignition lock.

The first "Keyless Go" system went into series production in the Mercedes S-Class (W220) in 1998. The vehicle could be opened with a remote in a credit card format and – as a new feature – it could also be started via a start button without a mechanical ignition key. The card had to be in the vehicle interior. Later, depending on the vehicle manufacturer, the keyless go function was integrated into the usual remote key, which also had a manual emergency key and included buttons. Here, too, all you had to do was take the key with you into the vehicle and start the car using a start key. This requires the comfort control unit to detect the individually coded key in the vehicle, which is possible thanks to antennas inside the vehicle. Today, "keyless" starting is part of the standard, at least in upper mid-range models. HELLA is one of the market leaders in the field of individual key systems and supplies numerous well-known car manufacturers.

The next stage of development: passive entry/go

The passive entry/go system from HELLA is a further development for the remote key that actively triggers convenient functions via buttons. All you have to do is carry the key with you, for example in your trouser pocket. If the car owner approaches the car at a distance of around two meters, an ID transmitter (a remote key that has been expanded to include the passive function range) ensures that the vehicle can be opened via the door handle. Beforehand, the system checks whether the ID transmitter is authorized to access the vehicle. The locking system also functions passively via a sensor surface on the door handle (door handle electronic module). The ID transmitter communicates bidirectionally via radio with the comfort control unit and enables numerous other functions. For example, different parameters can be stored in each individual key assigned to one person, such as the steering wheel position, the seat height or the seat position. The memory function can also be extended to other, individual vehicle parameters. The engine is also started via a start button: the ID transmitter must be located in the vehicle interior. Of course, the remote key (ID transmitter) is also equipped with corresponding buttons for active control of the door lock or tailgate or, depending on the vehicle manufacturer, even for starting the engine.

Apart from that, what is often forgotten is that radio keys are also design elements. They often come in a refined chrome and leather design. They are therefore also a prestigious accessory that is nice to place on the restaurant table. Remote keys with small displays are already being used in series production in luxury vehicles and also make an impression. It is obvious that, in future, we will even get to the point where smartphones replace car keys.

You can find out more about HELLA's passive entry/go system, the door handle electronic module and the sophisticated antenna technology inside and outside here