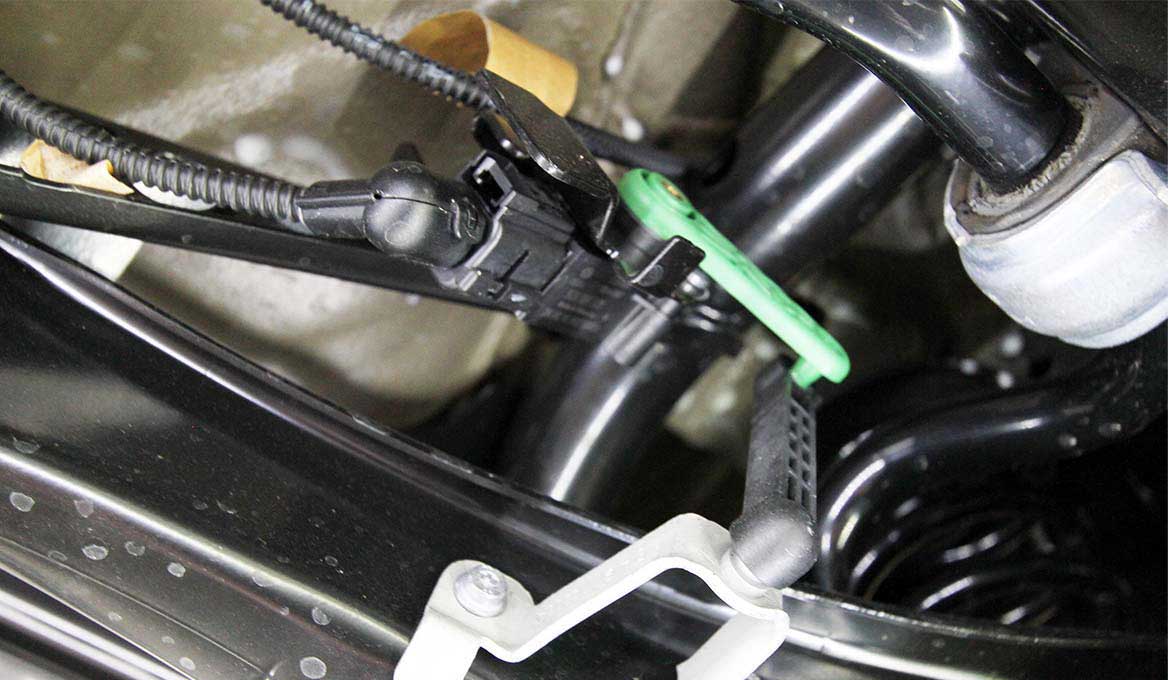 Angular position sensors are used wherever a rotational movement is detected in the vehicle. Examples are vehicle level measurement or headlamp levelling and also measurement of the steering angle or of the throttle position. In the past, it was mainly the mechanical potentiometer that was used, which measured the resistance value by means of friction contacts. In the meantime, however, the non-contact and wear-free induction measurement method has replaced this way of measuring.

Environmental conditions play a major role in the accurate collection of data. For example, angular position sensors, which measure the vehicle's inclination (deflection values) and which are used for level adjustment and/or headlamp levelling, are placed more or less in the open in the vehicle's suspension area. This exposes them to sometimes adverse conditions. And this makes the insensitivity of the angular position sensors to moisture (for example, water tightness, IP6K9K) and temperature fluctuations all the more important. HELLA's CIPOS® sensor technology not only works without contact and is therefore mechanically independent, but it also meets reliability requirements because of the stable construction of the chassis. The electronics, for example, are located in a laser-welded housing made of polyamide PA66.

The actuating mechanism must be smooth-running and robust to counter any mechanical effects and environmental influences. The actual movement is converted into a rotary movement by means of a metal or plastic connecting element via a rotor. The sensor measures the exact angular position using the induction method. On the basis of these values, headlamp levelling (the cut-off line) is regulated via the headlamp levelling control unit by means of electrical actuators. In addition, the values are used for active chassis control or they flow into the ESP control unit.

The measuring principle of a steering angle sensor is also based on the inductive, frictionless CIPOS® technology. Today these sensors are often integrated directly into the steering control module of the electromechanical power steering and must therefore be small and compact. The small installation space requires robust, reliable and, at the same time, precise measuring technology. The measuring principle of a steering angle sensor records the angle of twist and the large torsion angle of the shaft. This requires high measuring speed and a result showing meticulously exact values. In addition, the sensor must have a high level of electromagnetic compatibility (EMC). Furthermore, separate angular information of the output and input shafts provides various options for optimising steering system performance and functioning.

Incidentally, the workshop professional must pay attention to the "zeroing" of the steering angle sensor, for example after adjustment and measurement work on the chassis. If the steering angle and driving direction do not match, there may be problems with assistance systems such as the stability programme. The information provided by each individual vehicle manufacturer is to be observed.

Whereas in the past, worn conductive tracks on the throttle potentiometer caused problems and led to an irregular engine run, today non-contact angular position sensors with CIPOS® technology replace the component. Depending on the opening angle of the throttle valve and also on the actuating speed, the injection volume and the ignition angle are appropriately corrected. In addition, the signal from the throttle position sensor is used to detect the partial load depending on the engine speed and the intake air mass, and also for full load detection (throttle fully open) and deactivation of the lambda control and also for the mixture enrichment. In modern vehicles, there is no longer a mechanical connection between the accelerator pedal and the throttle valve. Depending on the values of the electronic accelerator pedal sensor (also with CIPOS® technology), the throttle valve actuator is controlled by the engine control unit. The term "gas by wire" also comes up in this context. The exact position of the throttle valve is permanently reported back to the engine control unit.

The CIPOS® angular position sensors (Contact Less Inductive Position Sensor) from HELLA can be used in numerous applications to measure angles precisely and reliably. Angles are measured inductively using a non-contact and wear-free method. A high degree of measuring precision is therefore guaranteed throughout the sensor's entire lifetime. As no magnet is required, the angular position sensors also guarantee insensitivity to magnetic fields and power lines. This means that such technology is ideal for use in electric vehicles.

Especially the redundant angular position sensors (double sensors) enable failure detection and thus provide a higher level of safety for the entire system. Various installation positions are possible via the repetitive characteristic curve of the output signal path (depending on the sensor structure used). This increases the number of possible applications. The CIPOS® angular position sensors are designed for the following interfaces for data transmission, depending on requirements: analogue, PWM, PSI 5 (peripheral sensor interface with two-wire line) or SENT.

Advantages of the SENT interface

The advantage, for example, of sensors with the SENT interface (Single-Edge Nibble Transmission), is the digital signal voltage emitted, which cannot be distorted on the way from the sensor to the control unit. In addition, it offers the advantage over pulse-width or frequency-modulated data transmission that up to six data packets can be transmitted in one data protocol. The result is that it enables several, different measured values to be recorded.