09/20/2018
09/20/2018
Lippstadt, September 20, 2018. At the IAA Commercial Vehicles in Hanover taking place from September 20 to 27, 2018, lighting and electronics expert HELLA will present how projection technologies as well as LED reversing lights and LED worklights allow improving vision and visibility during daily work routine (Hall 16, Booth B01).

Accidents continue to happen when loading and unloading commercial vehicles. One possibility for improving workplace safety consists in optically highlighting danger zones. This is why HELLA has developed the VISIOTECH projection technology. It allows projecting warning signals and symbols onto the ground. The technology has already been integrated into three products for special vehicles: in the LED Projection Module and the two warning lights SL60 LED and Modul 50 LED Spot. The Projection Module and the SL60 warning light will be presented at the HELLA fair booth. Both products are approved for applications outside the German road licensing ordinance (StVZO). For special applications on the road, special permits are required.

The LED Projection Module was specially developed for original equipment. The projections make it possible to clearly mark, for example, the required loading or safety areas for commercial vehicles or emergency vehicles. It projects an exclamation mark as warning symbol. HELLA develops and realizes other projections together with the vehicle manufacturer.

The SL60 LED warning light is available, both, for original equipment manufacturers and on the independent aftermarket. A special lens optic allows the light rays to converge and become so sharply focused that, depending on the light's orientation, a horizontal or vertical line appears on the ground. This allows warning not only vehicles and pedestrians about an approaching vehicle but the lines also facilitate vehicle navigation. The SL60 LED warning light is available with red or blue projection line.

In addition to better vehicle visibility, good vision also increases work safety. At the IAA Commercial Vehicles, HELLA is therefore presenting new reversing- and worklights of the compact series. Especially reversing lights are frequently exposed to water, salt and gravel throw. The company therefore developed worklights for withstanding even the toughest conditions. The housing therefore consists of a plastic that is fully resistant to corrosion. The material furthermore offers conductivity that is comparable to aluminum, which means that the LEDs can work at full power supply even if the ambient temperature is high. The back of the housing has cooling fins for allowing the necessary outward heat dissipation.

The 800 lumens of the Modul 70 LED compact - also available as reversing light -- provides extra-wide illumination thanks to its four high-power LEDs. Its compact dimensions make it suitable for installation in small spaces.

The Power Beam 1000 LED compact -- also available in its reversing light version -- generates six high-power LEDs with an output of 1000 lumens and an energy consumption of 12 watts. These worklights are thus optimally suited for the change from halogen to LED technology.

For applications requiring even more light output, the Power Beam 1800 LED compact makes sense -- with its six high-power LEDs, the work light generates 1850 lumens. But energy consumption is just 26 watts throughout. It is thus ideally suited for a lighting upgrade.

At the fair, HELLA furthermore presents two worklights for special applications with extremely high lighting requirements. With its 4000 lumens, the Ultra Beam LED Gen. II is the most powerful worklight of the Ultra Beam series. With its 7800 lumens, RokLUME 380 provides more than twice as much light as xenon worklights. Both worklights are also available in the glare-free ZEROGLARE illumination version. It ensures that drivers of oncoming vehicles are not blinded. For instead of a reflector, special lens optics create a sharp horizontal cut-off that directs the light onto the ground in front of the vehicle instead of into the field of vision of oncoming vehicle operators.

Simply changing to LED with the ECO series worklights

The worklights ECO18 and ECO26 LED by HELLA enable an easy change to LED technology. Thanks to its compact size and universal shape, the ECO series can replace virtually all the usual halogen headlamps in a simple and fuss-free way. The worklights also boast a fantastic lighting performance of 1,350 or 2,000 lumens while only consuming 18 or 26 watts. The ECO18 LED worklight is also available as reversing light.
2018
Picture-Download 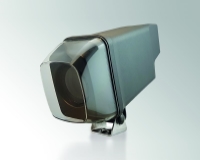 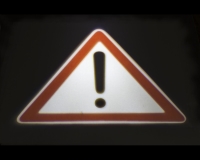 09/20/2018
Video
Communication with light
Light projections can help to identify entrances and exits on a bus. Play video