New company HELLA eMobionics is intended to promote innovative product solutions for electric rickshaws, among other things
11/17/2020
11/17/2020
Lippstadt/Pune, 17 November 2020. The Indian mobility market is dominated by two and three-wheelers like no other in the world. They account for over 80 percent of all vehicles in India. Electric rickshaws in particular have experienced significant growth in recent years. It is estimated that there are already over two million of them, and this figure is expected to continue to rise. In order to serve this growing two and three-wheeler market in an even more targeted way, the lighting and electronics specialist HELLA has founded the new company "HELLA eMobionics" in India. To start with, the new subsidiary will use HELLA's existing production facilities in the country. It is also conceivable that it will set up its own production site in the future.

"India is the world's largest producer of auto rickshaws. They are one of the main means of transport in India along with the other two and three-wheelers and will play a pioneering role here, particularly in view of the ongoing electrification of mobility," says Dr. Naveen Gautam, responsible for HELLA's electronics business in India. "By establishing a new subsidiary for our two and three-wheeler business, we can penetrate this specific market even better and offer tailor-made technologies. After all, the requirements in this market differ, sometimes significantly, from our core automotive business."

"As an independently run company with a highly motivated team, we are even better equipped to further expand our position in this special market environment," says Omkar Kulkarni, who manages HELLA's new two and three-wheeler business in India. "Of course, we also benefit from our experience in the automotive business. For example, we have a high level of expertise in the field of power and control electronics as well as distinct industrialization expertise. In our view, both are important unique selling points."

HELLA has been active in the market for two and three-wheelers since 2017. The product focus is mainly on Bluetooth-based control units, motors, 48-volt motor controllers and voltage converters. HELLA has been represented in India since the end of the 1950s, initially through joint ventures. Today, HELLA employs around 1,600 people in India, about 700 of them in research and development.
2020
Picture-Download 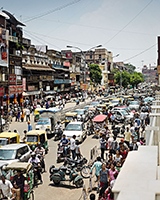 700
Article-Download
Press release, PDF (0.08 MB)
11/17/2020
Contact
Dr. Markus Richter
Company Spokesman
Rixbecker Str. 75
59552 Lippstadt, Germany
Tel.: +49 2941 38-7545
Fax: +49 2941 38-477545
Markus.nucy@quklRichter@hella.com
12/01/2020
You accept the required cookies by using the website and its features and continuing to navigate around it. You can manage cookie categories and accept additional categories under Cookie Consent Options. By clicking on the “Accept” button, all categories of cookies are accepted. You can withdraw your consent at any time with future effect. You will find further information in our Privacy Policy.
Cookie Consent
We use the following categories of cookies on our website:
Required cookies are needed to provide you with basic functions during use of the website.
${description}