Pioneer of white LED light discusses current lighting solutions and research projects with HELLA experts.
07/21/2017
02/23/2017
Lippstadt, Germany, 30 November, 2016. Today, the lighting and electronics expert HELLA welcomed Nobel Laureate Professor Shuji Nakamura at its in-house light testing facility. In the early nineties, the trained electrical engineer developed the blue light emitting diode (short: LED) in conjunction with the Japanese scientists Isamu Akasaki and Hiroshi Amano. Their successful research allowed for the first time to generate white LED with the help of a conversion material (phosphorus). In 2014, the scientists were awarded the Nobel Prize in Physics for this achievement.

These days, it is no longer possible to think vehicle lighting without LED's anymore. And that is so not only thanks to their great energy and luminous efficiencies. "Their small design provides car manufacturers with new styling opportunities. When using many LED's in a single headlamp and wiring them to the vehicle sensors, new safety-increasing functions can result. This harbors enormous potentials", says Kamislav Fadel, Executive Board member of the Business Division Lighting at HELLA. "Shuji Nakamura's research has been the cornerstone also for our own work. We're therefore delighted to have him here as our guest today."

Nakamura at first visited the HELLA light testing facility: a 140-meter long and eleven-meter wide roofed street, where headlamp and signal lamp systems can be tested independent of environmental impacts. Thereafter, the focus of attention turned to new developments and research projects. To that end, the Nobel Laureate visited the Research Institute for Automobile Lighting Technology and Mechatronics (L-LAB) in Lippstadt. The L-Lab, founded in 2001, is financed by the University of Paderborn, the University of Hamm-Lippstadt and HELLA. Its goal consists in developing tomorrow's automotive lighting systems. LED's play an increasingly central role in vehicle lighting.  Without the successful research of Shuji Nakamura, this would have not even been conceivable", says Kamislav Fadel.

After his visit with HELLA, Shuji Nakamura continued his trip by attending the anniversary celebrations of the "Optoelectronics and Photonics" Research Institute of the University of Paderborn. 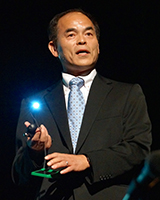 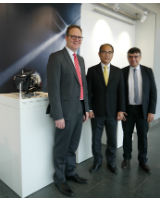 700
Article-Download
Press release, PDF (0.03 MB)
02/23/2017
Contact
Dr. Markus Richter
Company Spokesman
Rixbecker Str. 75
59552 Lippstadt, Germany
Tel.: +49 2941 38-7545
Fax: +49 2941 38-477545
Markus.ngmz@xjhaRichter@hella.com
02/23/2017
You accept the required cookies by using the website and its features and continuing to navigate around it. You can manage cookie categories and accept additional categories under Cookie Consent Options. By clicking on the “Accept” button, all categories of cookies are accepted. You can withdraw your consent at any time with future effect. You will find further information in our Privacy Policy.
Cookie Consent
We use the following categories of cookies on our website:
Required cookies are needed to provide you with basic functions during use of the website.
${description}