07/10/2017
07/10/2017
Essen, May 05, 2017. Hella Pagid, the Essen-based brake system specialist serving the independent aftermarket and operating in a joint venture with automotive suppliers TMD Friction and HELLA, will remain Official Partner of the Audi Sport TT Cup for the current season.  All Audi TT's participating in the Cup are equipped with PAGID RACING brake linings. As partner of the Audi TT Cup, Hella Pagid supports the up-and-coming British racer Jack Manchester.

The Audi Sport TT Cup was launched in 2015 and has enjoyed great popularity since then. Part of the framework program of the Deutsche Tourenwagen Masters (DTM), an average of 80,000 spectators followed the individual racing events. Special: the Audi Sport TT Cup provides talented young drivers the opportunity to introduce themselves to the sports world and to successfully establish themselves in motor sports.  "We want to support young racing talents during their career start and thus contribute to an efficient youth development on the international stage", says Madeleine Korthues, Marketing Manager at Hella Pagid. This year, the company thus supports for example the young racer Jack Manchester (18) with number 15. "Jack Manchester is a great fit for us since his exemplary and performance-oriented thinking incorporates the basic company values."

Jack Manchester started his racing career in 2016 and immediately proved his talent. Already during his first year of racing, Manchester achieved 7 podium finishes and 5 victories. "We're looking forward to a first-rate race and a successful season 2017." The first race this season will take place at the Hockenheimring on May 7, 2017. 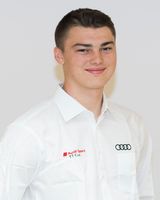 700
Article-Download
Press release, PDF (0.04 MB)
07/10/2017
Contact
Dr. Markus Richter
Company Spokesman
Rixbecker Str. 75
59552 Lippstadt, Germany
Tel.: +49 2941 38-7545
Fax: +49 2941 38-477545
Markus.tfaf@blyoRichter@hella.com
07/10/2017
You accept the required cookies by using the website and its features and continuing to navigate around it. You can manage cookie categories and accept additional categories under Cookie Consent Options. By clicking on the “Accept” button, all categories of cookies are accepted. You can withdraw your consent at any time with future effect. You will find further information in our Privacy Policy.
Cookie Consent
We use the following categories of cookies on our website:
Required cookies are needed to provide you with basic functions during use of the website.
${description}