Caution: risk of burns. The lamps may still have residual heat from previous operation.

Never touch the glass bulbs of the lamps with bare hands.

To replace the lamps, proceed as follows:

· To replace the rear lights on the front passenger side, open the cover on the right (figure 10) 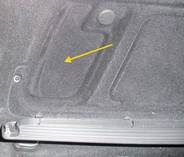 Important safety note Technical information and practical tips have been compiled by HELLA in order to provide professional support to vehicle workshops in their day-to-day work. The information provided on this website is intended for use by suitably qualified personnel only. Reprinting, distribution, reproduction, exploitation in any form or disclosure of the contents of this document, even in part, is prohibited without our express, written approval and indication of the source. The schematic illustrations, pictures and descriptions serve only for the purposes of explanation and representation of the instructions and cannot be used as a basis for installation or assembly work. All rights reserved.