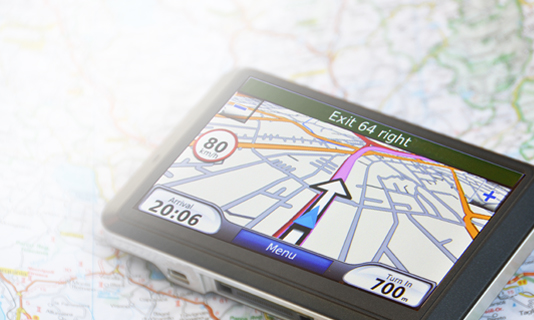 GPS is ubiquitous – but what does that really mean? Find out here!

GPS is a global satellite navigation system that enables location and the precise time to be determined using the known position of satellites in space. And this is possible with precision down to about 1 millimeter or 5 nanoseconds respectively. This can be used to calculate speed, direction and movement.

Previously developed by the United States Department of Defense (DoD) for military purposes, the technology is constantly undergoing new developments and can be found in every navigation device and in mobile phones.

It works like this:
the GPS system comprises 24 satellites that are distributed so that at least four satellites are simultaneously in view at all times and at any place on earth. This number is necessary so that the receiver can determine their spatial position (x, y, z) and the deviation of its clock from the GPS system time.
The satellites transmit digitally encrypted data which the GPS receiver uses to calculate its precise distance from the satellites. If the receiver knows the distance to three satellites, it can determine its position with pinpoint precision.

There are currently about 30 GPS satellites (some active and some designated as reserves) circling the earth along 6 different orbital paths at an altitude of 20,200 kilometers and a speed of 4 km/s. In addition to navigation systems and mobile phones, they also transmit their data to a host of monitoring facilities called the control segment, which consists of 9 monitoring stations spread across the globe and one master control station. The control segment evaluates the data and corrects the course of individual satellites as needed by sending adjustment commands.