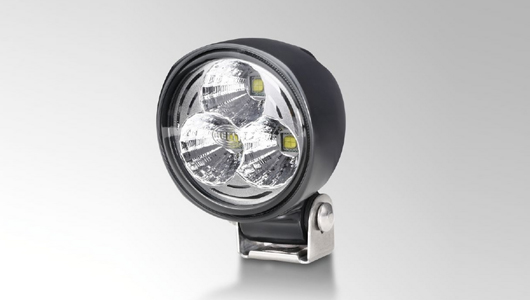 The HELLA Module 70 LED Generation IV is a powerful, ultra-compact LED work light. Despite their small dimensions, its three high-power multichip LEDs generate a light output measured at 2,500 lumens with an energy consumption of just 30 watts.

The black housing is made of robust aluminum and is fitted with additional cooling fins to provide effective heat dissipation for the high-power LEDs.

The color temperature is 6,500 Kelvin, which makes it almost the same as daylight. The electronics of the multi-volt-capable Module 70 LED can be operated at both 12 and 24 volts.

The integrated electronics of the multi-volt capable headlamp provides effective polarity reversal protection and guarantees a constant brightness even when the operating voltage fluctuates between 9 and 33 volts. In addition, temperature sensors protect the work light from overheating.

In addition to the classic close and long range illumination, the Module 70 LED Generation IV is also available with extra wide special illumination.

With the Module 70 LED Generation IV from HELLA, you get a work light that produces a powerful LED light output at xenon level despite its compact dimensions.

What’s more, it can now generate 2,500 lumens – an improvement on its predecessor, the Module 70 LED Generation 3, which had an output of just 700. This has been made possible by the three innovative multichip high-power LEDs working in conjunction with a sophisticated heat management concept.

In combination with an extremely robust housing and small design, this makes the Module 70 LED Generation IV a work light that is suitable for a wide range of applications.

Thanks to the top-quality multifaceted reflectors and the lens, the light beams of the LEDs illuminate the entire work area. Alongside the classic variant for close and long-range illumination, the headlamp is also available for a wide range of requirements as a variant for extra wide special illumination.

The color temperature of 6,500 Kelvin is similar to daylight and makes colors more distinguishable in the dark, making sensory perception through the human eyes much easier. This in turn prevents symptoms of fatigue, increasing the safety of the user.

The right work light for every situation

Experience our electronics products for agricultural and construction machinery interactively.